How does improvisation influence jazz music and painting?

My cousin, Will Sellenraad, is a jazz guitarist whose parents are both painters.  I often wonder how he might have been influenced by them as he was growing up in New York City in Soho surrounded by art and artists.  Long before my cousin became a musician (he is 11 years younger than I am), I started listening to jazz and became a huge fan.

Listening to a live jazz performance in particular, is different than any other type of performance because it involves improvisation. I am always intrigued by the nonverbal communication that takes place between the musicians on stage. Sometimes they have played with each other for a long time and other times they are playing together for the first time. Regardless, there is a special language that only these musicians know and understand which enables them to create something mystical through this communication.

As a visual artist myself, there are many opportunities for improvisation also.  In creating a painting, I often start with an image in my head, but the end result usually only bears a small resemblance to the initial visualization. Here lies the improvisation. And  from where does this improvisation come? The mind, the heart, the integration of both? I would suggest that it is an integrative process starting with the intellect which then is brought into the heart and finally released in an art form such as a painting or piece of music. What happens along the way is usually unpredictable and nonlinear.

If this is the case, the improvisational jazz piece represents an incredible and complex moment:  a group of people ‘conversing’ to create something that they do not know until that moment and that which they may never recreate again.  This is the reason I enjoy jazz so much.

So when might a visual artist and a jazz musician collide and coincide? What makes this collaboration interesting or even a potential success? I recently read about John Zorn, a New York musician, playing at the Guggenheim Museum, during the Agnes Martin exhibit.  In describing Martin’s work, Zorn said he was “blown away, by its profound humanity—the handmade quality and subtle sense of detail where the ‘mistakes’ or ‘imperfections’ are what make it glow, what make it perfect.” Art News

I had seen the Agnes Martin exhibit before I read this article and was taken by the deep spirituality of her work. Though I wasn’t that familiar with her complete works, I felt like I knew her on a deeper level after experiencing the exhibit (it was more than viewing art on walls….). I could imagine her in her studio for hours, staring and contemplating, drawing grids and drawing over them, over and over again, scrutinizing the lines, perfect and imperfect alike. 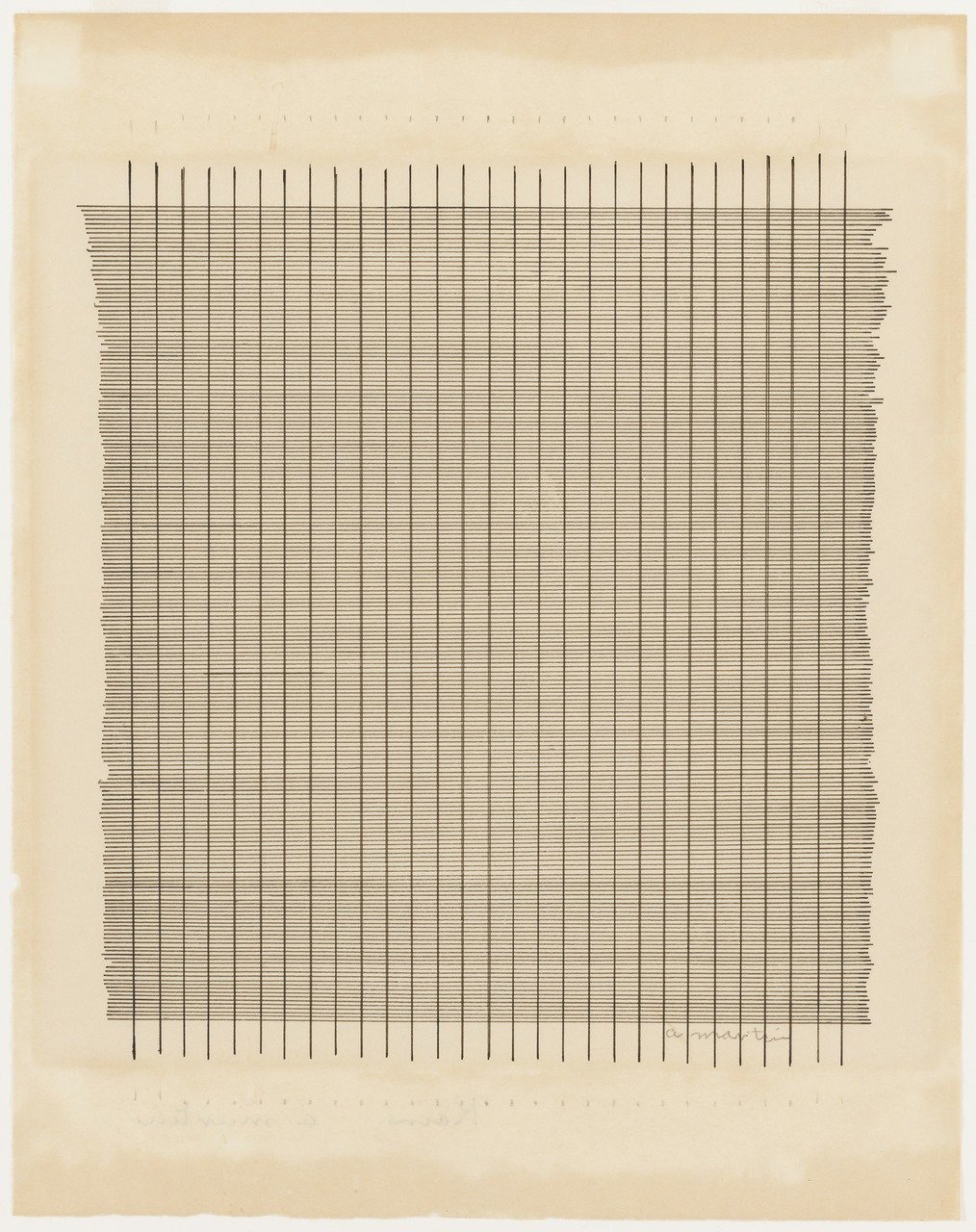 Agnes Martin, "Tremolo", Ink on paper, 10" x 11", The Riklis Collection of McCrory Corporation,© 2016 Estate of Agnes Martin / Artists Rights Society (ARS), New York. Tremolo picking on a guitar is a trembling effect which can be achieved on a guitar. I wonder if Agnes Martin was thinking of this when she titled this work.

Agnes Martin herself wrote in her notes now published in Arne Glimcher’s Agnes Martin: Paintings,Writings, Remembrances (Phaidon), “Art work that is completely abstract - free from any expression of the environment - is like music and can be responded to in the same way. Our response to line and tone and color is the same as our response to sounds. And like music, abstract art is thematic. It holds meaning for us that is beyond expression in words.”

This statement made sense to me when I thought about how painters and jazz musicians might complement each other. This is when I started to understand how my cousin, the son of two New York painters, developed his musical talent in the realm of jazz.

Check out this image that Will chose for his first album called “Streams”. It is a painting done by his father, Johan Sellenraad.  The image evokes movement and fluidity and a clear relationship to the music on this album, as well as to his relationship with his father, the artist. 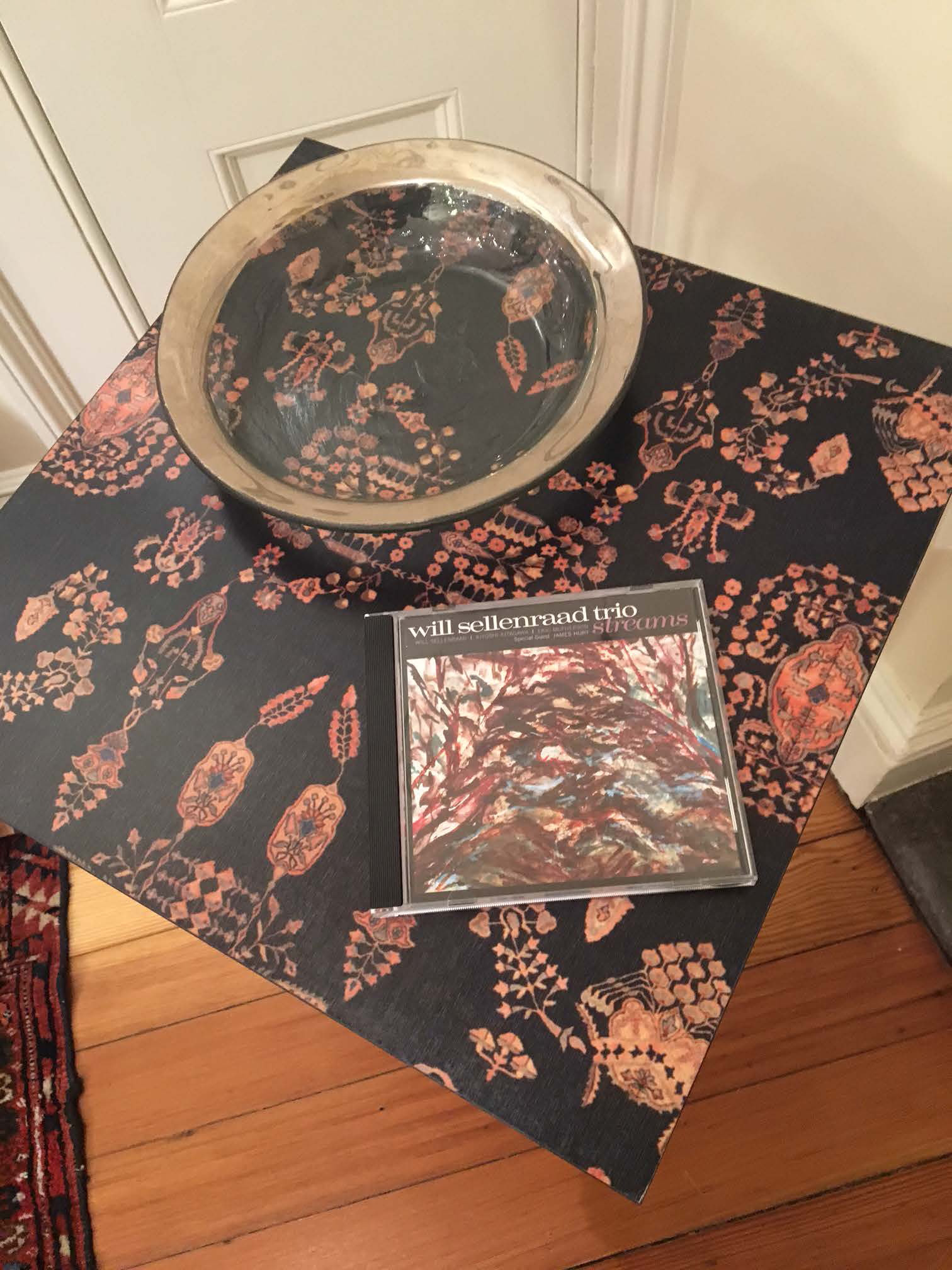 Will Sellenraad's "Streams" sitting on "Midnight Blooming" LAMOU table from the "Under Your Feet" Collection.